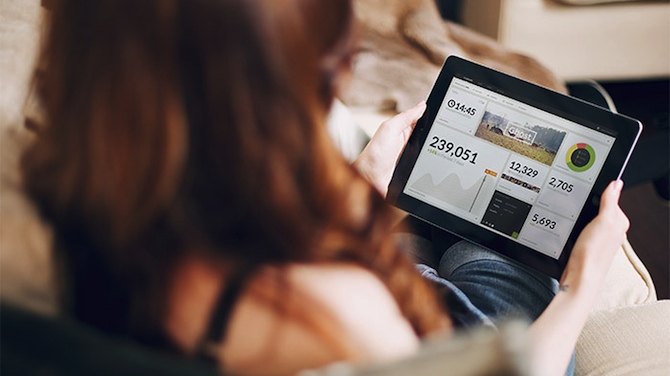 It’s official: Ghost is to become a reality.

For those of you who don’t know what I am talking about, I would refer to Ghost as a blogging platform that could become a genuine option for those of us who use WordPress to blog. It was first announced by WordPress developer extraordinaire, John O’Nolan, back in November 2012. At the time it attracted an enormous amount of interest, but was nothing more than a concept. But O’Nolan clearly recognized the potential he had in his hands and set about producing a prototype.

Now Ghost is backed by a Kickstarter campaign that has already surpassed its funding target (with 28 days left to go). You know what that means? Ghost is going to become a reality.

This brand new CMS has been built from the ground up to be incredibly intuitive. It is a response to the development of WordPress into something that is much more than just a blogging platform. That increase in functionality has inevitably led to an increase in size, options and complexity. Compromises have been made. Ghost is O’Nolan’s attempt to bring things back to basics and focus on creating a CMS that aims to do just one thing: allow you to blog with remarkable ease.

Whatever the end result, there is no doubting that Ghost looks damned pretty: 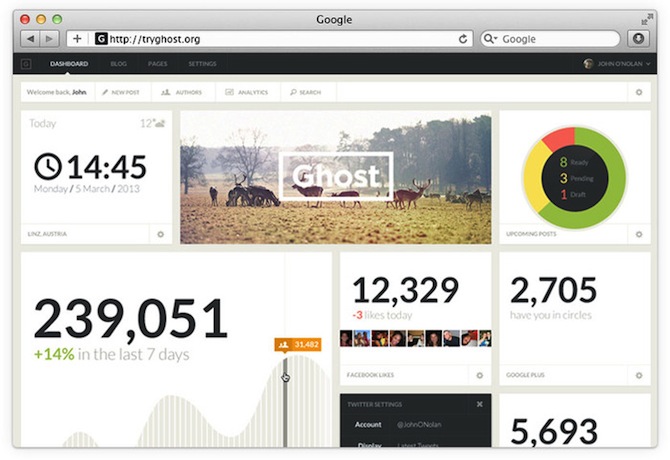 But there is a great deal more to it than that. It incorporates the kind of simplicity and ease of use that I would love to see present within WordPress. One feature I am particularly excited about is the ‘Writing Screen’: 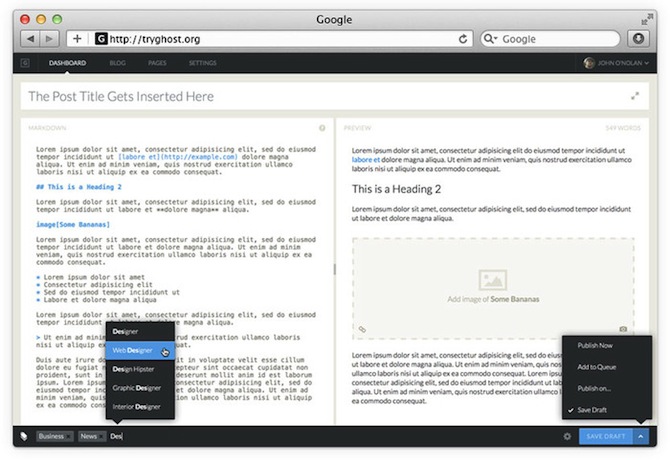 The incredibly simple markup language Markdown is on the left, and a live preview is on the right. The focus is almost exclusively on the content, with subtle menu options at the top and bottom.

This is how I would like publishing in WordPress to look — for now, I have to make do with the flawed Distraction Free Editor. Jealous much?

There’s a lot more to love about Ghost — just check out the Kickstarter page and even try it for yourself.

What Does This Mean for WordPress?

I don’t want you to think that I’m planning on abandoning WordPress any time soon. Although Ghost may be a wonderful concept, there is no way it is simply going to knock WordPress off its perch and become the new blogging standard.

For instance, consider the extensibility via plugins and the design options via themes — that is not something easily replicated by any platform. While I think Ghost could end up being a more usable CMS for blogger types, it will not be able to compete with WordPress for sheer breadth of scale and usability in the foreseeable future.

I am however very excited to see the end product for two reasons:

Ultimately, I think it’s a win/win. There will be people out there who will migrate to Ghost, thus providing us all with a more competitive blogging environment. And the introduction of a new and innovative blogging solution should only boost innovation across the board and influence WordPress’ development. I can’t wait to see how this story develops.

Now it’s over to you: what do you think of Ghost? Is it something you would consider trying, or even abandoning WordPress for? (Perish the thought!)

I’d love to get your thoughts, comments and opinions in the comments section below.

Show all Articles
Next blogpost:Curating Content for a WordPress Blog (How I Do It)