Let’s face it – nobody likes taxes, but they are a necessity if you like having roads to drive your car on. Also, things like water, electricity, the Internet are funded by your taxes – you know, just the foundations of our civilization. But that doesn’t mean you can’t be smart about it and try to reduce income tax if possible, and keep some of that hard-earned loot to yourself.

So when we wanted to do a unique Christmas promo for our users, back in 2013, we started looking into the way we run ManageWP to get some ideas. What we found was awesome.

Our accounting department sends us regular financial reports. We knew that all the profit we made during the year would be taxed, so we figured that the best way to reduce profit would be to gear up early for the next year. See, if you’re a US citizen, there’s a cool thing called itemized deduction. It’s an eligible expense that lets you decrease taxable income. Or, as normal people would say, you don’t pay tax for the tools of your trade. It’s basically the same in Europe, as well as Australia, Canada, and other cool places with giant animals.

So, each December we look into the tools we like, and go for the yearly plan. PhpStorm? It rocks, annual subscription. Adobe? Annual subscription. Amazon Web Services? Annual. WordCamp Europe sponsorship? Heck yeah! This way we file thousands of USD under itemized deduction.

We found a way to reduce income tax for ManageWP subscribers by switching to an annual or biennial plan. High fives all-round.

What if we send out an email to all of our users, explaining a great way to reduce income tax by signing up for an annual ManageWP subscription, and using the 2013 revenue to pay for the 2014 service? ManageWP is ideal for this kind of promo:

So we opted to send an email, as well as a dashboard notification, explaining the benefit to our user base.

We also decided to sweeten the deal, by giving an additional annual and biennial discount. The old discounts were 10% for the annual and 20% for the biennial cycle. We wanted to simplify this for a while, by changing it into “month free” and ” three months free”. That’s 17% and 21%, in case you’re like me and can’t be bothered to do the math. So, as an added benefit, whoever upgraded to an annual and biennial plan, would get a 17% or a 21% discount, instead of the old 10% and 20%.

It was beautiful. We sent the email on short notice, two days before Christmas. On that single day, our daily revenue tripled. The users kept upgrading in the next seven days, and December ended up being the highest grossing month, with 20% higher revenue than November, a month that featured a successful Black Friday promo.

The feedback from our users was overwhelmingly positive: we got a dozen emails thanking us for giving them a heads-up.

Now, this would probably be considered as cannibalization of our revenue – the bump that we experienced is actually coming out of the monthly revenue in the next 11 months. And you’d be right, if it wasn’t for one significant factor: churn. Our earlier analysis of the user demographic showed that the monthly subscribers were more likely to cancel their service than the annual and biennial subscribers. There’s a number of reasons for this, but the two main ones are:

By giving our users a gentle nudge, we managed to get a fair number of them to commit to a long-term relationship. We also reduced the number of payment-related issues. All this reduced our churn rate by 20%. We got to keep 1 out of 5 subscribers that would usually churn, which is an awesome side benefit.

In 2014 we repeated the promo, but without the increased discount (the “month free” and “three months free” were now a part of the regular offer). As expected, the result was not as spectacular: the last year’s discount was now a part of the regular offer, and the users who took us up on the offer did not need to upgrade – their renewal is due around Christmas anyway. Still, we noticed a significant uptick on our revenue.

For 2015 we decided to email our user base two weeks before Christmas and see what happens. The early warning definitely helped our users prepare for the upgrade. Our daily income in the past two weeks is 20-50% higher than usual, with no sign of relenting.

If you run a subscription-based business like website maintenance, I highly recommend putting an end-of-year offer mentioning the income tax deduction. Your clients will be all the happier for it, and you’ll get a nice Christmas bonus.

Merry Christmas from your ManageWP team! 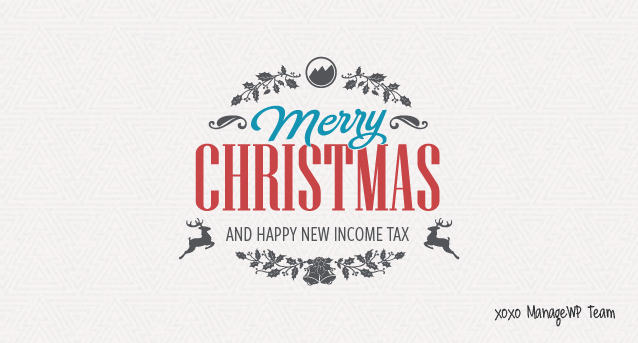 Show all Articles
Next blogpost:History Tool Added to Orion