Encryption is an essential part of maintaining a secure online experience. However, when it comes to WordPress websites, there’s a lot of confusion around certain terminology – especially when the acronyms are so similar. This is the case with SSH vs SSL.

Short for Secure Shell and Secure Sockets Layer, respectively, SSH and SSL share many similarities. For example, they both help create a secure connection on the web. However, there are a handful of differences between the two that are important to understand so you can ensure that you’re using these features properly.

In this post, we’ll introduce you to both SSH and SSL, explaining what each one is and what they’re used for. Then we’ll take a deeper dive to discuss some of the key differences between the two. Let’s get started!

An introduction to SSL

As we mentioned earlier, SSL is short for “Secure Sockets Layer”. It is a security protocol that helps safeguard the protection between web browsers and servers by encrypting the data that is transmitted between the two.

As a WordPress user, you may be at least somewhat familiar with the term from having to install an SSL certificate on your site. SSL is needed in order to enable HTTPS browsing:

It’s important to note that, although many people still refer to it as SSL, this term is technically the outdated version of Transport Layer Security (TLS) protocol. In a nutshell, SSL 2.0 and SSL 3.0 are now obsolete and have been upgraded to TLS 1.2 and 1.3. While there are some differences, they basically function the same way and serve the same purpose. Thus, for this article we’ll refer to it as SSL.

SSL helps encrypt your data while it’s in transit, to prevent malicious actors from intercepting it and executing Man-in-the-Middle (MiTM) attacks. The SSL protocol is applied to servers via SSL certificates.

An introduction to SSH

SSH stands for Secure Shell. It is a cryptographic protocol that enables a secure connection to a server. Its purpose is to help protect your site files and data from being compromised when managing them via a remote connection. Basically, it helps to safeguard your server.

Chances are that when you’re accessing your website’s server, it’s done via SSH. This is instead of, for example, accessing the original server located at your hosting provider company. SSH helps ensure that when you’re performing tasks such as adding new files for plugins and themes on your WordPress site, hackers won’t be able intercept the data.

However, you may not necessarily require SSH access. For example, one of the reasons many users opt for managed WordPress hosting is so that they don’t have to handle the technical tasks themselves. However, if you’re more hands-on, you may wish to obtain this level of control. If that’s the case, it’s important to choose a host that offers SSH access, as not all do: 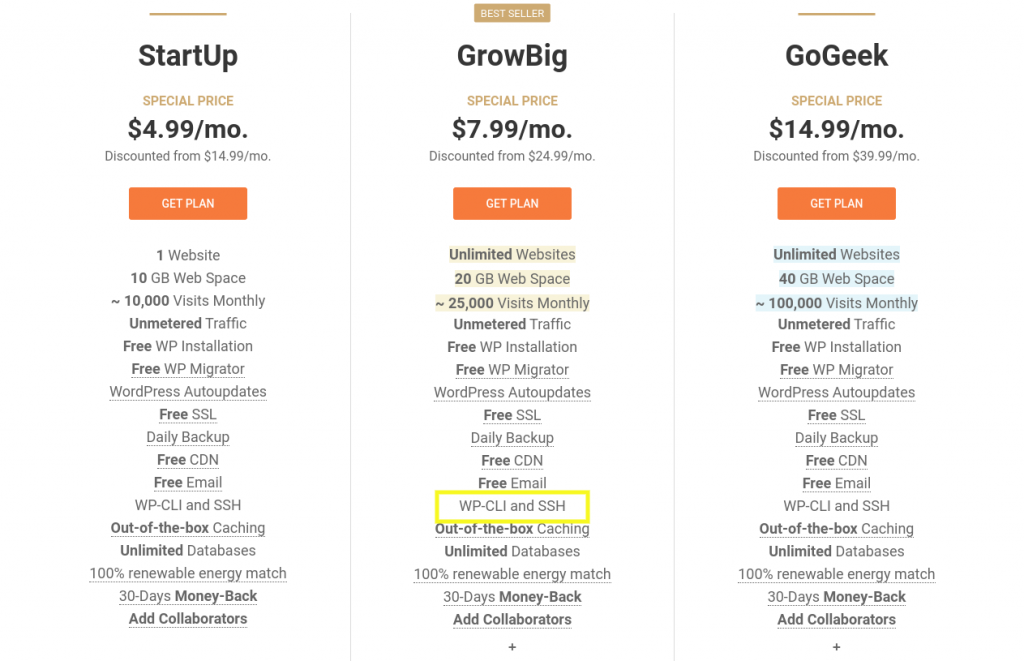 The process of creating an encrypted connection is done via what’s known as SSH tunneling. To create the tunnel, authentication is needed using a set of cryptographic public and private keys, or a username and password.

Now that we understand a little bit more about each of these encryption protocols, let’s take a look at how they differ. Below are three key differences between SSH vs SSL:

Of course, there are additional differences that distinguish the two. However, the aforementioned three are the most important ones to be aware of.

How to get SSH and SSL for your WordPress site

By now, you likely understand the main points regarding SSH vs SSL. However, you may not be sure how to actually obtain the two for your WordPress site.

Let’s start with SSH. As we mentioned earlier, the easiest way to acquire SSH access is to choose a hosting provider that offers that level of control with its package.

The process for using SSH varies by host. For example, sometimes you have to request for it to be enabled. Other times, it may be offered as a one-click feature. If you’re a more experienced user or a developer, you may also be able to use it with a system such as puTTY.

We recommend checking with your web host for further guidance. They’ll likely have specific instructions or documentation you can refer to.

Meanwhile, if you’re looking for an SSL certificate for your website, you have a couple of options. One is to obtain the certificate for free using a website such as Let’s Encrypt:

Here, you’ll be able to sign up for an SSL certificate and then install it on your website. You can also configure your WordPress site with SSL using a plugin such as Really Simple SSL.

However, a quicker and simpler approach is to just ask your hosting provider if they offer it. Most hosts will include a free SSL certificate with their hosting packages. They might also provide a one-click feature for you to enable it with your WordPress installation.

When you’re managing a WordPress site, it’s essential to ensure that you’re using secure methods to safeguard your data. This includes using encryption and authentication protocols so that your communication is protected from malicious actors. Both SSH and SSL help you do this, but differentiating between the two can be challenging.

As we discussed in this article, there are three key differences between SSH vs SSL:

Do you have any questions about the differences between SSL and SSH? Let us know in the comments section below!

Will Morris is a staff writer at WordCandy.co. When he's not writing about WordPress, he likes to gig his stand-up comedy routine on the local circuit.

Show all Articles
Next blogpost:A Quick Guide to WordPress 5.8 (An Overview of 5 New Features)